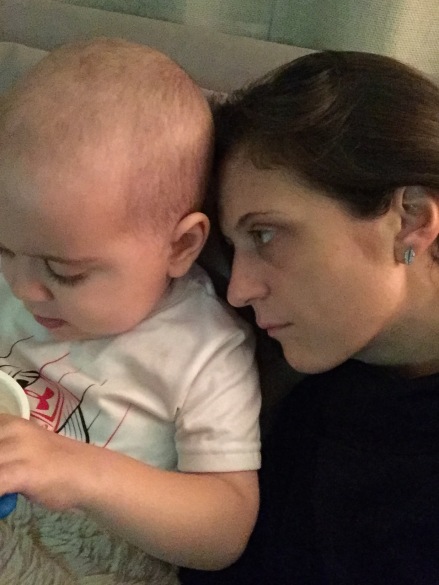 This morning Mike and I brought Calum to the hospital for a very important procedure. At the end of the first month of treatment, another bone marrow aspirate is performed, which was to give us the clearest picture to date as to how treatment has worked thus far, and, most importantly, how it would continue to work throughout his more-than-three-year protocol. They expected him to achieve remission by the end of the first 30 days, which happens for many patients, but not all. The percentage of kids who do not achieve remission in the first 30 days, or who later relapse, was the greatest worry in the back of my mind. Achieving remission after the first 30 days sounds momentous, and it is, but there would still be three more grueling years of treatment to endure, no matter what. This long treatment protocol has been fine-tuned over the last 60 years, and doctors have found that the elongated protocol has made a big difference in reducing the risk of relapse. Just 50 years ago, the survival rate for childhood Leukemia was a bleak 10%, rising only significantly in the last couple decades to nearly 85-90%. We are unquestionably lucky to be living in this day and age, yet cancer is sneaky and, unfortunately, it takes a long time to trick the body into ridding it.

In addition to the bone marrow test he would undergo that morning, he was having his permanent port placed in his chest, just below his right nipple. This was wonderful as he had had a temporary port with IV lines hanging from his chest for the last month, making it difficult to bathe, sleep or move. Within a couple days, he would be able shower regularly and, within about a week, his new port would be healed enough for him to fully submerge in water; bath time could resume normally.

I won’t lie; the first 30 days following Calum’s diagnosis was the friggin blitzkrieg. The steroids he was prescribed to take orally every day caused crazy mood swings, an ogre-sized appetite, interrupted sleep, and his distended stomach and puffy cheeks were so huge that our cute, formerly blonde-haired, little boy was barely recognizable. He ate non-stop. He was seriously angry at times and it was unimaginably difficult to meet his eyes with an unfamiliar stare. The steroids totally altered him and, in the midst of an already weak time, the look in his eye threatened to steal away my confidence. It was a battle to remember it was still my sweet Calum in there.  I had to act and react as I always had; I had to rise above and know that, greater than anything I might have been feeling, my child was more scared by this disruption.

Thanks be to God, the end of the first 30 days also marked the end of the intensive steroid treatment, which tested me just about as far as I could handle.  The morning he took his last dose of steroids, I cried tears of joy; the 24-hour diner that became my kitchen was CLOSING. No more midnight muffin cravings or all-day pasta buffets. The meltdowns would take another week or two to subside, but we had reached another milestone. I’ve come to learn this journey is all about milestones, however small, I had to remind myself that we were making progress all the time.

A month prior when we landed in the hospital, it felt like we would never reach this day. We woke Calum at 5:30am to get him to the hospital for a 6:30am arrival. He didn’t actually get brought into the operating room until 11am, so it was a solid five and a half hours of fending off his hunger. He was HANGRY and emotional when they finally brought us in to prep for surgery.  He had become so upset that they gave him something to sedate him. It was awful. I could only walk halfway to the operating room with him. I held him tightly as we walked down the hallway. It took everything within me to hand him off to a stranger. Even in his drugged state he cried out for me as the doors closed between us, and a dagger was delivered to my heart. I hoped the nurse would not ask me if I was OK, so that I might not have to answer and crumble into a thousand pieces.  However difficult that morning was, I knew it was one-step closer to the end goal.

Calum came out of his surgery and procedure beautifully that afternoon. After what seemed like an eternity waiting for him to wake up, all he requested upon opening his eyes was pizza. Since his procedure was on a Friday, we were scheduled to have results of his bone marrow test by Monday, so we asked everyone we knew to please pray through the weekend.